Today I am going to share with you my tried and tested recipe for a Spanish dish from Valencia that will be baked in a clay pot. Before I bought such a dish, I baked it in a baking tray and the effect was similar. It is a very easy dish to make even for beginners, but takes some time. I always start with preparing all the necessary ingredients. So here we go.

5 loops of black pudding (can be more or less)

200 grams of chickpeas (I bought it in a jar and then drained it before frying) if you like it, you can add more.

1 gram of saffron or paella spice or rice dye. (in the original recipe, saffron is added, but if we do not have it, it can be replaced with the spices mentioned above.

1 larger tomato, to be sliced

I peel the potato and cut it into slices about half a centimeter thick, also cut the tomato into slices of similar thickness. I put the prepared vegetables together in the plate. I peel the garlic head from the outer leaves and then cut it halfway around so that it adds flavor to our dish when frying. I cut the second tomato in half and grate the inner side on a coarse-meshed grater so that the skin remains in the hand after grinding. I throw away the skin. Each box of black pudding is pierced with a toothpick (this way it will not fall apart when frying).

I heat up the extra virgin olive oil in a frying pan. Put a head of garlic in the center of the pan and add the potatoes. After the potatoes are fried on both sides, I put them into a clay vessel. Then I put the sliced ​​ribs on the pan and fry them on each side together with the garlic. If the ribs are thick, you can put them into a pot and stew them with water or, after frying, put them directly into a clay vessel. I prefer softer ones, even after frying, for about 20 minutes.


After taking out the ribs, I also take out a head of garlic and put it on a plate. Then I put the chopped bacon on the pan and fry it on each side. After frying, put it into a clay vessel. Then I fry black pudding on each side. After frying, I put it on a plate. I add grated tomatoes to the pan (if we see that there is too much oil in the pan, pour it out before adding the grated tomatoes). I add a pinch of salt. We fry for about 5 minutes. I preheat the oven to 250 degrees up and down with a fan.


In the meantime, put the water and broths in a pot. When the water starts to boil, I add saffron or spices. When I see that the tomatoes are ready, I add chickpeas to them, stir and fry for a while. Then I add rice, a pinch of salt, and sweet paprika powder, then stir and fry for about 2 minutes. Thanks to this, the rice does not stick to us. I put the fried rice in a clay vessel. Then pour the previously prepared water with saffron and broths into a clay vessel. In the middle I put a head of garlic and on the sides black pudding and slices of tomatoes. I put the prepared dish into a preheated oven.


I will start counting the minutes from the moment when the water in the oven starts to boil. So I will bake from boiling for 10 minutes at 250 degrees and then lower the temperature to 220 degrees and cook for another 10 minutes. After this time, I take it out of the oven and set aside for 10 minutes. Below I have added photos of how to prepare this dish step by step. Bon Appetit. 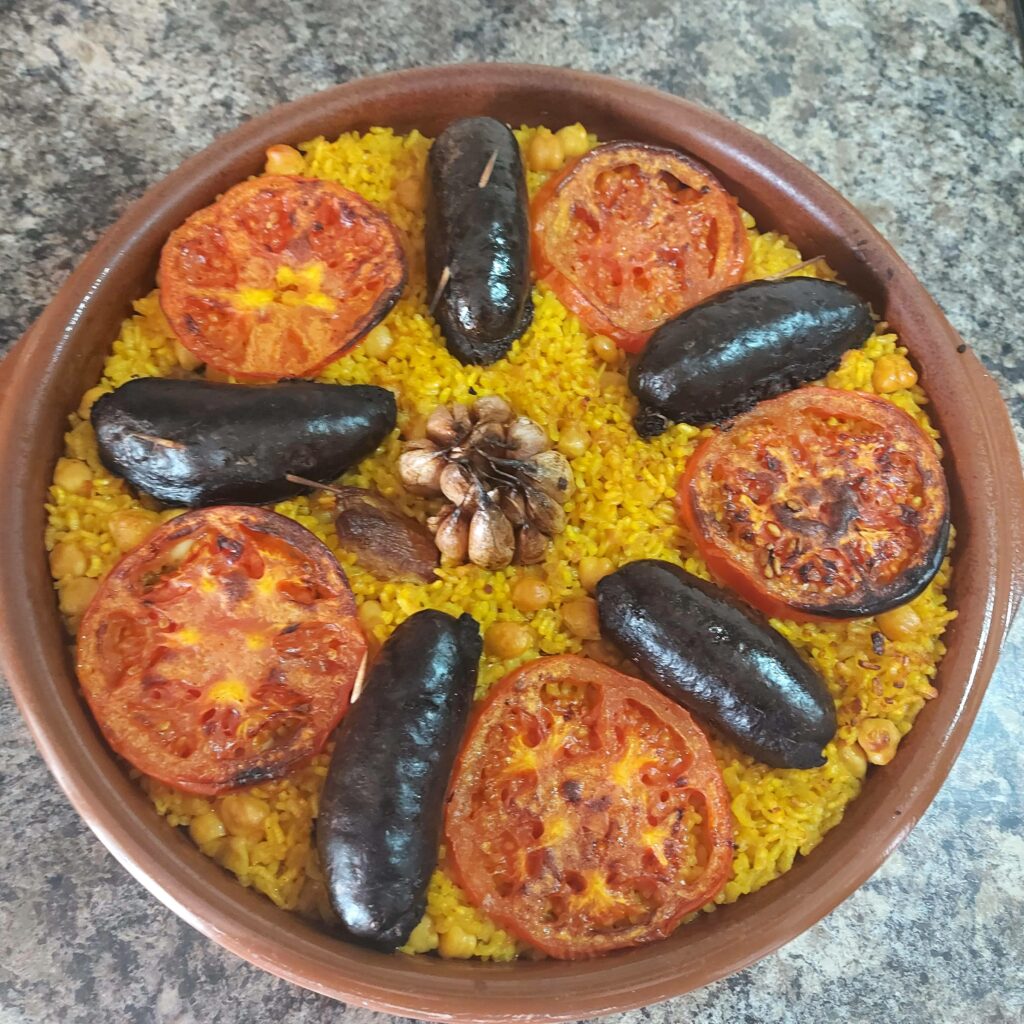